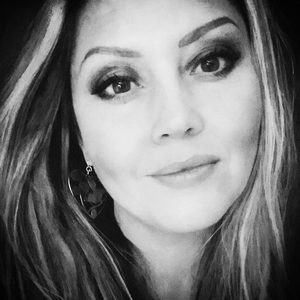 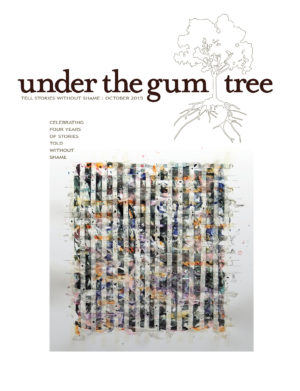 Chelsea Schott is a writer, teacher, and professor living in Houston, Texas. A regular contributor to the Houston Press, she divides her time between writing social commentary, reviewing music, and instructing others on good writing craft. You can find her work in such places as Germ Magazine, The Winter Tangerine Review and My Other Ex from the HerStories Project. You can find her on Facebook and Instagram.

Chelsea’s piece, “Neighbors,” is a candid portrait of two starkly different families, each struggling to reconcile the dichotomy between what’s seen and unseen, as well as the things we endeavor to keep hidden. As a young girl, Chelsea learns that her neighbor, well-liked and respected in a small town, is a rapist who takes advantage of her childhood innocence. The piece is blatantly honest, dealing with themes that are both painful and personal without hesitation. Chelsea’s is a bitter coming-of-age story that straddles the line between truth and appearances, giving the reader an unbiased look into the morally confounding world in which we live.

The piece seamlessly blends classical language with more casual diction that suits the farm setting, giving the reader a sense of not only where you came from, but where you’ve arrived. Did you intend to use this blend of styles to give the reader some background about you, the author? Some context for the story, perhaps?

It wasn’t intentional, meaning I didn’t set out to blend them on purpose. The casual language just comes from a sense of the voice they used. Because I’m relying on memory, I just have a feeling of how people spoke. Of course the narrative is in my own voice, or that character, Chelsea.

Do you feel that the innocence of early adolescence is something that we must overcome ourselves, or is it something that others must help us surmount? Did you feel as if Luz was stealing the purity you hoped to cling to a little longer?

Luz, without a doubt, is a thief of many things. It’s hard to imagine that innocence is something to be overcome, but in this case, innocence works against Chelsea. Her struggle in navigating her own understanding of a budding sexuality is made more difficult by Luz’s presence and actions. That sexuality will forever be corrupted because it was formed in the shadow of a rapist, worse, a rapist that is willfully excused by the community through their denial.

Your piece deals with the theme of family, what’s seen and unseen. We may believe we know someone, but in reality they lead a life we barely experience. Our lives intersect in few places with few people. Do you think it is possible to truly know someone? To see people for all they are, to understand each piece that makes them whole? Do you feel like you knew yourself at the point of time represented in your piece?

Chelsea doesn’t know herself, especially at 13 years old. She’s very innocent despite having a mother who pontificates salty advice ad nauseam. Her mother’s words are abstract, she can’t seem to connect it all until the moment she hears the screams–her moment of epiphany, a tragic moment really.

Does anyone really know another person? I don’t think it’s actually possible. If it were, would we have words like, “betrayal”? Personally, I prefer not knowing. I think to write about secrets is far more interesting than to write about public personas. People often hide their ruin, but I think that’s where our art lies…in those moments of clarity, no matter how abrasive they are. They may be the only moments of truth we experience.

When your mom is talking to you about Luz, she says, “You shouldn’t be surprised. The world is full of hypocrites.” You go on to say your innocence “Dried up like rain in the desert.” Did you feel betrayed or angry at your mother for depriving you of your innocence, in a sense? Do you wish she had never said that to you? Do you think you would’ve understood that Luz was raping his granddaughter if your mother hadn’t said this to you?

Chelsea interprets her world through the lens her mother provides. Yet, that lens is a fractured, cynical thing. Mama is unaware of the extent of Luz’s predatorial advances. Chelsea’s mother has a sense of Luz’s perversion, and that sensitivity is something Chelsea lacks–and the reason why Luz is able to take advantage of children. I don’t think Chelsea could have interpreted the events any differently.

How did your interactions with Luz’s granddaughter, Charlene, affect you? Did she make you feel the need to match her level of maturity or did you want to return to childhood?

Chelsea doesn’t know how to respond to Charlene’s sexuality. She knows she’s somewhere between childhood and adolescence, and on the outside of inherent knowledge that women share. This knowledge is the stuff of taboo in our culture. Chelsea can’t match Charlene’s maturity (or exploitation) because she doesn’t share her damage.

How did your whole experience with “the neighbors” affect your relationships with men, both as a teenager and today? Do you think it made you less of a trusting person than you’d like? A stronger person?

Everyone is stronger for surviving trauma, so in that sense, yes. Personally, I learned not to trust adults. The community failed these children in not prosecuting Luz. Learning the level of collusion adults will achieve in order to cover-up a crime against children is something I still have a difficult time accepting. We teach children to tell adults when something goes wrong, but what happens when those same adults resist? This is the real antagonist, the real evil in the story.

What are the consequences of growing up too fast?

I suppose corruption of innocence. The results of a damaged childhood is perpetuating those crimes onto other children. It’s systemic. A grand miscarriage of justice, and perhaps our greatest failing as a society is when we fail to protect children. The destruction is colossal, it simply can’t be underestimated.