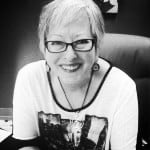 Phyllis Brotherton has a long history accounting for things. She received her MFA in Creative Nonfiction from Fresno State University at the age of sixty-six. Topics of her writing include motherhood, identity, sexuality, and aging. Her work has appeared in literary journals including Spry, Your Impossible Voice, Shark Reef, and Jet Fuel Review. She was recently accepted to participate in a panel for AWP16 titled, “Worlds Within the Other California,” and is currently working on a collection of her essays, “Methods of Accounting.” She is a financial executive at the local PBS station and lives with her wife in Clovis, California.

Aside from a few very bad “Teen Angel” type short stories in high school the fact that I might write never occurred to me until after an also very bad second divorce. As is many times the case, the writing dream had been sublimated to a career in accounting and financial management. The joy of putting words to paper, which emerged in my early forties, has never stopped and only grown stronger. I really gave myself permission to get serious about writing in my late forties. I received my MA in nonfiction first, then over a decade later, with a passion for continued learning, I went back to school, receiving my MFA earlier this year.

I am more interested in reading fiction, than writing it. Spinning tales was only a teenage dream, though I have great respect for the talent it takes to write good fiction that mirrors life and the circumstances in which we find ourselves. I do have a passion for the real, for life as lived; an honest disclosure and self-reflection. That being said, I do find myself spinning the sometimes surreal out of raw factual life data, from a memory or image.

What topics do you often find yourself drawn to write about? Are there common themes you tend toward in all your writing?

Yes. Fortunately or unfortunately, I fall into certain subject ruts: My relationship with my adult son; my mother’s decline into dementia and her relationship with my brother; identifying as a lesbian later in life, aging and death. Not easy subjects, but they are all deeply personal and seem to have in common a search for identity.

The visual layout of this piece is fairly unique and it forces the reader to read differently. Why did you choose this format for your piece? How would the piece have been different if you had chosen to write in a traditional prose format?

I’ve never taken the easy or traditional route, either in life or in my writing. Non-traditional form is important to me, not just to be different, but to serve a purpose, which I hope is to further illuminate the themes going on in the piece. I am drawn to mosaics or collage as a work of art. And, in a way, I feel I am creating art by elimination, a kind of erasure. Brevity is also key. A reader will not see or be told everything and hopefully construct his or her own meaning.

These seem to be very separate glimpses into your life, very much independent of each other. What joins them together in your mind?

When you have lived sixty-six years, there’s lots of material to work with. I could organize a personal narrative in so many ways: my life in birds, my life in beds, my life in significant trees. So I attempt to smash the blue dishes of my life with a hammer and begin to fit together disparate shards, working them this way and then the other to create a piece of writing. “Creating Artifacts” was created in just this way. I worked and worked on it for many years, honing and refining, until it solidified, became intact and unchangeable.

Why did you pick these particular moments to include in the piece?

I work by association, by what suddenly occurs to me from the previous segment. This piece is also very much driven by the images that are conjured in my mind from Takashi Hiraide’s poetry. It is almost ekphrastic, like looking at a painting and personally reflecting on it.

You are quite fluid with the use of tense throughout the piece. How does this change the reader’s understanding of the events and how they are related to one another?

Yes, maybe because the past is very much present for me; photographic images captured in memory brought back to immediacy through the writing process. But, there is very much dream work here, as in section V. where I see myself in many imaginary scenarios, that are in a way spiritual moments. I fully believe there are many identities within each of us. Some play out, some stay hidden, but they are all part and parcel of who we are as individuals, sort of mosaics ourselves.

Sexuality is very much a hot topic issue right now. How did you feel writing on the subject? How do your sexuality come to influence the remainder of the piece?

This section happened organically by my reactions to Hiraide’s 42nd prose poem in his series. At this point in the piece, I am pushed to a kind of confession. What does cause us to do anything, make any decision? Many times there are multiple answers and no answers at the same time. Some things just are; my own cerebral “explosion.” I wrestled with whether or not I would keep this section in the piece for a number of reasons: self-consciousness, fear of judgment, the seemingly odd juxtaposition with the other subjects, my partner’s privacy and her own reactions. I faced all of these fears and decided against one more erasure. Deletion felt disingenuous, fear-based.

My current relationship with my son, though I hesitate to call it estranged, is distant. This really has nothing to do with my lesbian lifestyle choice (I hate the way this sounds), later in life. No firm answer or one reason usually exists to how parent/child relationships evolve into adulthood. And, in spite of our best efforts, not everything can be fixed. What I’m giving to the reader, to my son, to my partner, to the universe, is a glimpse of me; the innermost thoughts of one woman with many facets, many identities. I am creating artifacts to be discovered or pondered, which I also felt Hiraide was working to accomplish in his serial poem.

You quote a poem (For the Fighting Spirit of the Walnut by Takashi Hiraide) throughout much of this piece. What does this poem mean to you? How do you feel the use of the poem should affect the reader’s interpretation of the piece as a whole?

The genesis of “Creating Artifacts” began one early morning while reading Hiraide’s book. I was underlining especially important lines, as I usually do, and began to write furiously in the margins, in reaction to his words and images. My mind was on fire. In these moments, I was in “conversation” with this poet, tapping into something I could not, cannot explain. After I wrote this piece and shared it with others, including MFA professors at some point, I was encouraged to drop the quotes from Hiraide for basically two reasons: 1) to allow my writing to stand on its own and, 2) the complications of obtaining the poet’s permission. I experimented with removing all the quotes, but, the piece did not seem the same. The imaginary dance between two authors’ minds had disappeared. I felt like it had lost its emotional engine. I decided to keep the quotes in and face the issue of permission if it was ever accepted for publication. And, I am glad I did. The editors of Under the Gum Tree accepted it and sought permission from Takashi Hiraide’s publisher, with success, for which I am so grateful.