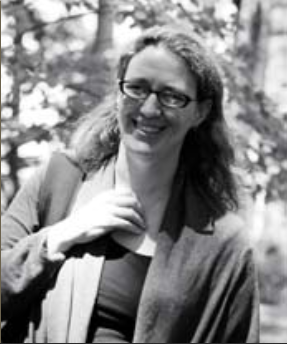 It’s been a while since we introduced you to one of our contributors, so we’re excited to bring you one of the authors from our October 2013 Issue 9: Penny Guisinger. We had the honor of publishing her piece “Six-point Win,” which we felt truly embodied our motto “Tell stories without shame.” Here is a short quote from that piece:

“I want to tell you that the person working next to me was my wife, but our status had been made uncertain by the election. Rather, the election—just four days prior—had failed to clarify what we were to each other.”

Penny lives and writes on the easternmost tip of the United States. Her work has appeared or is forthcoming in Fourth Genre, Solstice Literary Magazine, and About Place Journal, and her reviews appear regularly in The Quoddy Tides and The Review Review. Visit Penny online at pennyguisinger.com.

I started writing when I was in high school. I was writing a book about these two wise-cracking FBI agents, which was totally inspired by all the bad television I watched. I wrote in longhand in spiral notebooks – many of them. As for the “why” – why does anyone write? I think I needed a space that was entirely my own. High school is a tough time. There are a lot of peers watching whatever you do, and I found some space in those spiral notebooks that I could control. Nobody else cared what went on in there.

Ha! There’s almost nothing enjoyable about writing! It’s ditch digging. It’s laying train tracks. It’s bleeding all over the place. I hate it. What I love is revising. That’s when the magic happens. I love the part where a first or second draft has been ignored for the requisite few months, and it’s started to ferment. I like scraping the mold off the top and figuring out what’s going on in there. I love that moment when I can see, finally, where a piece is really trying to go – when the trail is lit up. With some pieces, that doesn’t happen cleanly, and it’s more like bushwhacking with a machete. I make it through, but it’s exhausting. Even in those pieces, though, there is that moment of “aha” when I can see where I’m trying to go. That’s the best part.

I don’t even try to write every day because I know I can’t, and that expectation is just a setup for feeling like a failure. I go through phases of doing that, but it never lasts. When I am in a writing mode, I write super early in the morning. I have two kids and a full-time day job, so early morning (before anyone else wakes up) is the only time that nobody wants anything from me. This schedule ruins me by 9 p.m., but it works.

What’s the hardest part of writing for you?

Second drafts are the worst. The first draft can be okay, because I’m just focused on getting words down and I’m not worrying about going anywhere. By the second draft, I start to feel pressure that the piece has to start to shape up into something, but it’s still a really messy phase. That’s anxiety-provoking. And the final revision is also very scary because I never know if I’m really “done.” I can be extremely annoying to be around in that stage. (My partner would confirm that, if asked.)

I revise up until the moment I submit. Then, after a piece is rejected, sometimes I revise some more before I resubmit. Sometimes, this process takes a couple of years. The piece that’s in UTGT was written very quickly, revised over a six-month period or so, rejected three times by other journals, revised some more, and then (thankfully) accepted! (While we’re on the subject, I wonder if Janna might let me tweak just a couple of sentences….? Is it too late? Kidding.)

Yes! I have a handful of essays in progress, and a book-length collection in the making. The book is called Shift, and it deals with many of the same themes as my piece in this issue of UTGT – coming out in a small town, navigating the politics of being in a same-sex relationship.

That seems like a number I should know, but I don’t! What I can tell you is, that first “yes” was exactly the amazing feeling that I thought it would be, but it didn’t last. Acceptance is like a drug. That high wears off and you need more, more, more. At least, I do.

Rejections get easier as you accumulate more and more of them. I have had pieces rejected too many times to keep count. Rejection is just part of the gig, and you have to get a lot of “no” before you get a “yes.” So now when I get rejected, I know it means that an acceptance is that much closer. (I’m sure there’s some crazy writer math for this.) I try not to get upset by rejection. We’re not supposed to take it personally, but that’s super hard. The act of submitting your work is very exposing, so I think it’s natural to feel the sting when someone says, “No, thanks.” I try to send something back out the door within twenty-four hours of having something rejected. Sometimes it helps. Not always.

Do you prefer typing or pencil to paper when writing?

I can’t write with a pen or pencil and paper, I have to type. Last summer, I broke a finger, and I was completely amazed by how it crippled my ability to write. I thought I would just be able to type more slowly, and it would be fine. But I found that interrupting that muscle memory completely derailed my ability to think. I couldn’t even formulate sentences in my brain unless I could type at my normal speed. I realized that, if I was a guitar player with a broken finger, nobody would expect me to just play more slowly. I learned some interesting things about my own process. (But I won’t do it again!) It took months to heal because I kept pulling the splint off so I could write.

These things: cooking, working, raising kids, sleeping, hiking, lazing around doing nothing, running, gardening, reading, thinking about writing, wishing I could make myself sit down and write, avoiding writing, and/or drinking coffee. There are many ways to avoid writing. My favorites include: Facebook, endlessly staring at my Duotrope submission tracker, reading other peoples’ writing, pouring more coffee, making a snack, petting the dog, pacing around, hating myself and everyone else, checking the weather forecast in cities I might go to someday, then searching for airfares to those cities…really, there’s no end to this.

This one is slightly easier (than answering the question, “Who is your favorite author?”) because it invites a plurality! Mark Doty’s Heaven’s Coast, Fitzgerald’s The Great Gatsby, Mary Karr’s The Liar’s Club, Dave Eggers Heartbreaking Work of Staggering Genius, Bernard Cooper’s Maps to Anywhere, Pam Houston’s Cowboys Are My Weakness, Tim O’Brien’s The Things They Carried, and Lia Purpura’s On Looking. I also love each year when the new volume of Best American Essays comes out. There are so many essayists doing amazing work.

Find a more respectable pastime, immediately! Failing that, surround yourself with other writers. Find a community of writers that you can immerse in. Listen to and give feedback. Don’t stay with whatever your first reaction is to any feedback – even if it’s good. Writing itself is a very solitary act, but I think it’s essential to have people to prop you up when things are rough and celebrate with you when they’re good. I also think that a little edge of healthy competition can keep you on your game. I want my writer friends to succeed, but I also don’t want to be left behind, so I work hard to keep up.

Just this: thank you for being readers. Without readers, writers are very, very alone.