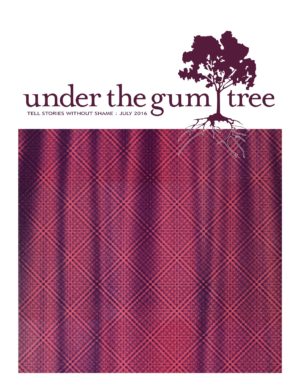 J. Daniel Thornton is sorry if you’ve ever seen him dance. When he’s not writing, he teaches online courses at Miami University and lives in Bloomington, Indiana. He is an Associate Fiction Editor at The Indiana Review. Tay Zonday follows him on Twitter, and you can too: @joethelion23

I started writing when I was fifteen or so. It was in some ways out of boredom and it was a lot of bad poetry, and in retrospect it’s such a hackneyed story, but in some ways not really. What inspires my writing now is very much what inspired my writing then. I find that it’s the odd or out of place things that are fascinating, particularly people who pretend to be something that they’re clearly not in some cases. There’s a fine line between what makes for an interesting fact, and what will make a good story, but I usually have to commit to that idea and explore it.

Why are you drawn to nonfiction? What can you express through nonfiction?

I’m drawn to nonfiction because it forces me to be in uncomfortable spaces. It’s a way of looking from the outside in, and really assessing who you were at the time and what’s going on with and around your subject. Of course, you can’t always write about these things up close, especially if they’re powerful personal experiences. There’s also something journalistic about it as well that for me at least, makes me feel that I have to be more fair in my nonfiction to people who appear in it than if they were fictional characters.

You address the guilt you felt for hiding your sexuality from Janice, among other smaller lies. How did writing this piece let you come to terms with that guilt? Do you still carry those emotions with you today, or have you reconciled them?

I think I couldn’t write the piece until I had come to terms with some of that. Much of guilt is a useless emotion, but I think that you can easily find yourself mired in it. And I think it would be fair to her that I wrote that essay in a way that was honest without being too self-aggrandizing, but since this is a personal essay, solipsism is something that you can’t sidestep. You are, after all, talking about yourself. Janice and I were in an unhealthy relationship at the time, and it’s much easier to see what was happening between us than it would have been if I had written about it five years ago. It would have probably been easier to be vindictive, but that would be unfair. We were taking two very different paths in our lives, and I wasn’t certain of what I was going to do after college until I started applying to creative writing programs.

Explain the significance of the title of the piece and why Sex and the City 2 came to be equated with the necessary punishment for all your wrongdoings.

The title comes from a Joan Didion collection of essays, “Slouching Towards Bethlehem,” which is itself an allusion to W.B. Yeats’ poem “The Second Coming.” I think watching Sex and the City 2 became equated to me with that rough beast. The film is insufferable because well, everyone in the film is insufferable. But I think the most awful part about it was that these people were never honest with one another. Carrie never really tells Big how she really feels, and instead is pissed when Big wants to stay in after a long day of working. It’s as though he has been a mystery to her for the entirety of their relationship, and that’s really disappointing, as this is supposed to be about this savvy female writer. It’s a film that doesn’t deliver on its subject matter.

The more that I read about feminism and came to terms with who I am as a person, the more I was convinced that seeing that film was a bit of a wake up call and a cosmic/karmic payback for me not really being honest with myself and others about who I was or what I wanted in a relationship. That this was my destiny if I continued on the way that I was going to end up in this situation, where I would be watching something abhorrent on a screen and then being thanked for it, as if I had done someone a favor. I have done favors for others and have felt much better about myself that involved becoming entangled in their personal lives, but watching a movie about rich white women and their problems being rich white women is inherently uninteresting.

While I think the material for a story matters, what really matters is how it’s executed. I’ve written (and read) stories that I am convinced have great material, but if you don’t write it in the right way it will fall flat, or be terribly boring. But this happens with a lot of stories that I’ve written too, and it’s about halfway through writing it that if its not going well, I’ll abandon it and come back to it in a week before I continue.

Why do you think you didn’t react like Emily did upon seeing Sex and the City 2, in theaters for the first time with Janice?

I had similar feelings, but to me I was more bewildered than anything else. It was a long time after I saw it that I found that the film was so terrible to many of its characters. Emily was more offended anything else. It was hilariously mean-spirited. And I think she was really shocked that this was something that considered itself to be empowering to women, especially when it consistently disempowered them over and over again, as well as pigeonholed every other minority character on the show at the expense of these white female protagonists.