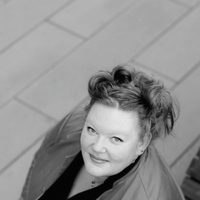 Camille Griep is the author of the novel Letters to Zell, an epistolary fairy tale. She is the managing editor of Easy Street and a senior editor at The Lascaux Review. Her shorter works have appeared in journals such as Cartridge Lit, Synaesthesia, and The First Line. She lives and writes near Seattle.

Camille’s piece “Roads, Lost” is her reflection on the time she spent as a camp counselor and the roads that were traveled that summer. She explores themes of finding and losing yourself, growing into the person you hope to be, and making decisions that will potentially change the course of your life. Readers can easily relate to the emotions conveyed in this piece and the weight it places on the decisions you make when you’re young.

I am one of those writers who started my storytelling journey at a young age. Though I’ve come to realize almost no one has a “normal” childhood, writing allowed me to reshape the strange narratives of my adolescence life in comforting and therapeutic ways. In high school, I branched into journalism–a choice that led to a paying part time job in college. I realized knowing how to write would help me no matter what profession I chose and it got me through the many years of corporate America slog until I emerged on the other side, ready to give writing full time a go.My favorite aspect of writing is to fill blank spaces–and not so much the blank page, but blank spaces of existing narratives. It allows me to find empathy for the lost and the unloved and the abandoned. I think those are things that mean a great deal to me in the real world, as well.Identifying and working full time as a writer has allowed me to understand not just artists and other art forms in a different way, it’s made me experience life and people in new ways. I’m always working and never working. The way the sun rises and sets, the radio plays, the dog naps–all of life is a story. It’s immersive and inescapable. At first that immersion scared me a bit, but I’ve given in to it and my life is richer for the surrender.

When I settled down to write for a career, I planned to jump right into novels. And I did. But about two months after I took my sabbatical, my grandfather–who was my father figure–was diagnosed with terminal cancer. It brought everything in my life to a halt, including my writing. I wondered if it was a sign from the universe, and I really questioned myself and what the hell I was doing.

From a practical standpoint, it was great because I had the flexibility to be in Montana to help out every two or three weeks. I traveled back and forth between my hometown and Seattle, taking writing classes when I could and trying to find a way to fit writing in. Novels were cleaned off the table. There wasn’t the time my brain needed to settle into a narrative structure requiring so much complexity. So I began writing flash and essays. I wrote flash because it seemed to be a discipline I could work in the time allotted. I wrote essays because Cheryl Strayed, Roxane Gay, and so many other essayists were speaking in ways that touched me deeply and made me believe there was space for me to reach out of the darkness I found myself sinking into.

Essays were a successful format for me. I’m comfortable with my own voice, if not always the subject matter I want to talk about. I picked up a column at the now defunct Used Furniture Review and kept experimenting with form. While “Roads, Lost” is not terribly daring with its format, for me it was venturing into territory that I don’t like to be in: It is far easier to talk about pain, for me, than it is discomfort, uncertainty, unrequited love.

Fiction is an easier vehicle for those awkward moments because I can cram them into someone else’s psyche, distance myself from them. The sensationalism of fiction is attractive because it’s somewhat anonymous, or maybe at arms-length.

When I started writing, I swore to myself was that I’d never write anything I couldn’t put my name on. I’ve kept that promise, and by facing my own nonfiction from pain to embarrassment to laughter, I’ve become a braver writer, and a better one, too.

Many coming of age stories examine the theme of lost innocence. Do you feel that this is true of “Roads, Lost” and in what ways?

In my late teens to early twenties, I hadn’t yet realized how much growing up I still had to do. I changed more as a person from 20 to 25 than I have in any period of my entire life.

The tale of that particular summer at the beautiful camp on the Boulder River was the impetus, the first push/pull, the first discomfort of the sort of change that was to come–the loss of innocence being realization that I would have to make real, lasting, and sometimes painful decisions about the person I would become, the places I would live, and the priorities I would make. I hadn’t ever stood in front of a mirror before and recognized myself as two different people. For staff celebrations, I changed out of my hiking boots and into platform heels, swapped mud for eyeliner. I didn’t have any concept of middle ground, and I was, perhaps for the first time, terrified. And much of it was wrapped up in my own perception of how someone–who I had deep feelings for–perceived me.

While this was the beginning of a sort of loss of innocence in terms of personal evolution and even in the sense of “you can’t go home again,” it would still be some time before I really lost my innocence in terms of love and loss. Though I’d assumed my childhood experiences with both made me more mature than my peers, it was in fact the opposite. I’m thankful the process was a gradual one.

For me, the ultimate loss of innocence is being able to pick my head up and realize I’ve almost never been truly alone in experiencing my life’s broad spectrum of emotions. The settings may vary, but art in particular– song, dance, visual, literary–is the most direct conduit to that call and response and why, I think, as humans, as empathetic humans, we’re so drawn to it.

You are also the author of the novel Letters to Zell. How does your writing itself adapt to different genres and how did this manifest itself in “Roads, Lost”?

Sometimes I wish I could be the sort of person who specialized in things. But I’ve had to come to terms with the fact that I’m a generalist and may never be an expert at anything. I’ve held jobs from snow plow dispatcher to corporate research analyst. I’ve never been very good at sitting still. This personality trait, unsurprisingly, followed me into my writing career.

In life, I learned to write stories, then journalism, then poetry, then novels, then flash, and each has informed and enhanced the rest. Currently, I am focusing most on CNF and novels. They’re sufficiently different formats that I feel they keep me sharp, forcing me to pay attention to the ways in which I present my voice and craft my narratives.

“Roads, Lost” was written while I was still in the developmental editing process of Zell. The tiny “epistolary” chapters I used for Zell informed the dueling braids of the essay. Using two voices within an essay can be risky, but for “Roads, Lost” it was a deliberate choice–one voice still lost and dreamlike, one voice pragmatic and descriptive–to help shore up the dichotomy at the heart of the essay.

Letters to Zell explores “happily ever after” and how it may be different from what was expected. How might the experiences written about in “Roads, Lost” have influence this perspective of your life?

“Roads, Lost” addresses a painful dichotomy I found within myself at nineteen. I wanted to be two seemingly incompatible people–a badass backpacking chick and a platform heel wearing export to Los Angeles. I think the primary protagonist in Letters to Zell is dealing with some of the same.

While Cinderella (aka CeCi) wants badly to be the Princess-on-her-way-to-Queen that was part and parcel of her marriage and pre-written story, she also wants to be something else. She yearns to be the woman wrist deep in dough, sweating over an oven filled with the arts of her true calling. These two selves are seemingly incompatible, so she builds walls between herself and her friends, family, and partner in the wake of these wants.

Eventually she finds reconciliation and a new self when she finally destroys the hurdles she built for herself. It is not unlike my own journey between city and country, businesswoman and writer, pragmatist and romantic.