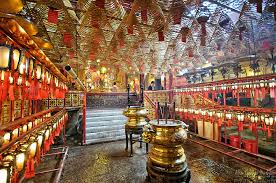 This year, Alle C. Hall’s work placed as finalist in for The Lascaux Prize and as a semi-finalist for The New Guard Machigonne Fiction Contest. Other work appears in Dale Peck’s Evergreen Review, Litro, Tupelo Quarterly, Creative Nonfiction Magazine, Brevity (blog), Another Chicago, Literary Orphans, and The Citron Review. She is the former Senior Nonfiction Editor at jmww journal, the former Associate Editor of Vestal Review, placed First in The Richard Hugo House New Works Competition, and is a Best Small Fictions and Best of the Net nominee.

There is a lot of repetition around the color red, especially in the beginning- can you speak to the meaning in that?

In Chinese culture, red is considered a lucky color, and one that brings joy. It is used all over temples and shrines: candles, incense, hanging cloths, large red lettering. The temple in which the first part of the story takes place was quite small, just a little corner thing, so the red felt omnipresent.

The narrative feels grounded in immediate physical and sensory details. What was the intention of this? Were you trying to have readers feel a dissonance, like they were watching from behind the same barrier the narrator?

Great question. I have a lot to say in response! First, I haven’t experienced disassociation as an effective place to write from. Even if the reader knows that the character is disassociated, the felt experience is flat. Second, I don’t try to make the reader feel anything. I just tell the story. Third, I am asking the reader to do a lot. She needs to be in Hong Kong. She then needs to take the emotional leap with me from sightseeing around the city to understanding her sexual abuse history; and finally, we have a Buddhist parable introduced with no warning. One way to keep the reader in the story is to ground them through physical and sensory details.

You talk about not knowing that the barrier was in place, the only indicator being that your “eyes ached sometimes.” Can you speak to that ache more? Was it physical? And if so what did it feel like? What would you do in response?

The ache was like there was something sheer pressing from the inside against my cheekbones, nose, and eyes. It caused eye strain, but not so much that I went to the eye doctor. At the time, I was locked in denial about significant abuse that was expressing itself as physical pain. Emotions resulting from physical abuse, they don’t simply disappear because the visible wounds heal or the abuse stops. They find a way out. Some people call it psycho-somatic, which to me, smacks of disbelieving the reality of the pain, even if the pain isn’t caused by something that Western medicine can diagnose and then cure.

During the time I was writing about, I was seeing an acupuncturist. I trusted that he and the system, writ large, would work out any medical issues. Which it did; if not indirectly. It took three years of acupuncture, Western talk therapy, a bodywork modality called Feldenkreis, a daily tai chi practice, and good ol’ American 12-Step programs to reach the point where the dream I describe in the piece broke through. It was another three to four years of really challenging work, and then another two the three of increasing functionality until I finally felt as if my life could progress forward in a “normal way”: triumphing over the issues as they came rather than chipping away at my history.

This piece, as I read it, falls into that category of pieces that are about something much larger than what is covered into the content of the piece. Can you speak to your ambition in writing this? And your decision to pick this specific setting to this specific story?

I have to thank all the editors at UTGT for the “much larger” quality of the piece.

I had no specific ambition in writing this piece beyond telling the story. I don’t use my literary writing as a way to get to issues that need to be addressed through some form of therapy. For me, all that work takes place in therapy. Don’t get me wrong; it is great to write about abuse, to use your writing for healing. But do not expect to publish that writing. Writing that gets published—particularly writing about surviving abuse—takes drafts and drafts to be able touch readers without overwhelming them.

The initial submission to UTGT had the temple scene, the market scene, and the rain in the café scene. The ending that existed evoked the whole mid-section that the editors were kind enough to lead me to. I think it was Janna specifically who encouraged me to go farther with what was hinted. So rarely does an editor ask for more words. What a joy.

When I sent her the next draft—not the final version but progressing towards it—she wrote to me: You went there.

The process was a great lesson for me in understanding how to actualize the need to stay in the story while conveying the back story without overwhelming the reader. In the case of Hong Kong, My Twenties, I accomplished the backstory with two phrases: “a thousand images of sexual abuse” and “It was my father.” Neither of those phrases, or the set up to revealing them where anywhere near the initial draft I submitted.

In the Temple you express an admiration for the faith shown in the ritual of the people around you. How would you define the role of faith in this story?

Fascinating observation. I never thought about the story like that. Thank you. Well, if I look at the story’s trajectory, I see my young self, seeking faith in a way that I don’t understand I am lacking; that faith as I could understand it at the time, is replaced by ideas of sex, and a lack of intimacy. It is through a growing faith that I am able to move through, and then past, the repercussions of the abuse: “There were a lot of seemingly random days, during that time;” and:

“Three months later, three more months of a life that appeared antithetical to a Western concept of progress, I spent a week feeling as if my brain was un-bending. Finally, I woke from a dream, a thousand fractured images of sexual abuse. I told my acupuncturist, ‘I don’t want it to be my father.’ He said, ‘Whatever it is, it’s already been.’”

I wasn’t trying to make a point about faith. However, if I look back at how I chose to convey the experience, I see a growing reliance on faith that takes me beyond my own experience to a universal truth.