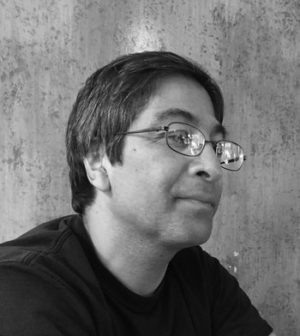 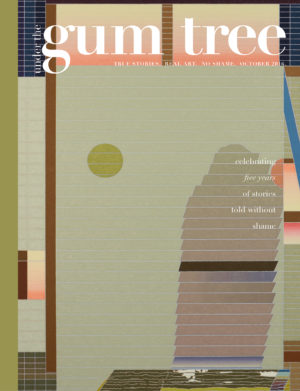 Stephen D. Gutierrez has published three books of stories and essays. Live from Fresno y Los won an American Book Award, and The Mexican Man in His Backyard is his most recent. He has published widely in magazines and anthologies, including nonfiction in Fourth Genre, River Teeth, Under the Sun, Alaska Quarterly Review, Third Coast, ZYZZYVA, and Cleaver Magazine. He is working on a collection of essays and hybrid nonfiction. He teaches at California State University East Bay. Stephen also participated in Under the Gum Tree’s recent national nonfiction simulcast, reading from his piece featured in our October 2016 issue, “Spiritual Direction.”

I started writing in college but I had always been a good writer. I always considered myself one inside. I started doing it seriously after being tremendously inspired by quality literature in an English class in my miserable last year of high school. It gave me a path forward, the call. What inspires me most now is the wish not to waste whatever gift I may have and be regretful on my deathbed because I could have done more. While I can do it, I think it would be a shame not to write. As well, I read my contemporaries and convince myself I have something to add to the literary conversation that is exclusive in its way—that is a bit different, that is me.

Why are you drawn to nonfiction?

In nonfiction you can be more direct and straightforward than in fiction. Really, you can write more nakedly and openly absent the required fictional mask of irony and authorial distance that yields its own rewards but that is always a mediating disguise. You can cry plainly in sight in nonfiction, which can be moving for the reader as well. Also, its confessional aspect appeals to my need to come clean.

Really anything that moves you enough to want to articulate it fiercely and exactingly for another person to experience is potential material. I suppose we go after that part of experience that isn’t easily translatable or explained to justify our words, and whatever brought awe to you is worth trying to pass on. Often these are very private moments that don’t seem worthwhile, but I think they are—the micro, the macro, the personal, the political, the act of writing itself—it’s all worth writing about if you’re passionate enough about it. Whatever excites your passion is your subject.

You refer to God as female in “Spiritual Direction.” Is there a reason for this subversion of the typical gender assigned to God?

It’s automatic now. “God” doesn’t exist. There’s no big man in the sky. Everybody knows that. So when we speak of God we are of course speaking of something else; what that something else is confounds me and everybody else, though people are getting close when labeling it an energy, a flow, a rightness with the universe due to certain moral precepts propounded by many religions for a long time, or just right decisions that are most in tune with your elemental self. Anyway, to refer to “God” as “he” is a trap. Immediately, we see the old man, and that’s not tenable anymore. “She” has its own risks because of reanimating the old human figure of God, but she’s novel, and new, and might contain the power I’m talking about for the time being. She might serve us well as we grapple with this new, evolving notion of divinity. And we might learn that she is realer than we expected, only different.

Sister Carmen Rodriguez has a deep, spiritual connection to her history and culture. Is this the spiritual direction you are seeking?

No, we’re very different. I’m in a different place, historically, culturally. I even have trouble identifying myself as “Latino” sometimes, it seems false to my real life and sensibility. If anything, I’d advocate everybody breaking free from their histories and cultures as completely as they can. For me, the sign of a healthy culture is that its individual members grow out of the culture recognizing that it shouldn’t be privileged or honored or regarded in any special way. It’s just a vessel for the inculcation of absolute respect for the worthiness of every single human being outside that culture. With that said, you can draw on what is good in your culture or has been fructifying, and Sister Carmen makes me proud to be Mexican-American. She has strength and mercy and compassion in equal measure, and she has a spirit that is Mexican-American that is mine, I recognize it, and I honor it. I don’t know what spiritual direction I wish to be pointed in or what I want spiritually, but I also think that is exactly the right frame of mind to have about all things spiritual. I’m lost, I’m okay. I’m not arrogant, I’m just trying to be as open as possible.

You write, “Without prayer we should have been dead a long time ago.” Even as you struggle with disbelief, you recognize the power of prayer. What accounts for that?

I think it’s true. As I said above, I believe we’re dealing with energies and forces we don’t understand yet when talking about religion and prayer. My gut tells me that all the lonely monks and devoted sisters and religious of all kinds have saved the world from nuclear destruction through their constant intercession on behalf of peace, of sanity, of life on earth instead of death and destruction. I think it’s the most sensible thing to do nowadays, pray against nuclear holocaust and for peace, without the assurance of a big ear in the sky bent toward you. Indeed, with the certitude that no such ear exists, desperation is added to the prayer-energy, and that must count. Prayer is serious business. It wouldn’t have lasted so long if it wasn’t.

In regards to participating in our creative nonfiction simulcast, what are the best parts of speaking/reading to a live audience?

I’m usually nervous before a reading of any kind even though I’ve been doing them for a while. The main benefit is selfish. I’m told I’m a pretty good reader, and when I feel the power of the words read right coming through me, I’m inspired to keep writing. I’m very doubtful about myself as a writer sometimes, very down on my abilities and calling, and getting up and reading and getting some good feedback from audience members and feeling good about myself doing it is all positive. I think, Shit, I should keep doing this. I should never quit.