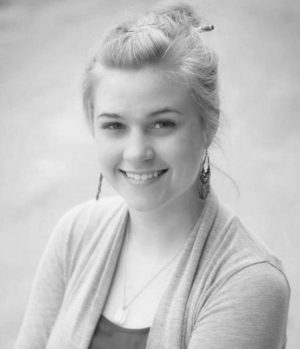 Mackenzie Myers is a native Michigander, temporary Oregonian, and soon-to-be Californian who usually writes about places and the science behind those places. She just earned her MFA in nonfiction from Portland State University, and her work has appeared in various publications, such as Husk, GADFLY, and Traverse magazine.

When and why did you start writing? How has writing shaped other aspects of your life?

I don’t remember when I started writing stories, but my career really kicked off in fifth grade when I wrote a story about a girl who turned her dog’s profuse amount of drool into glue that she sold to her classmates. (I was kind of a weird kid.) It won first place in a contest run by my local bookstore, McLean & Eakin. From that little slice of validation, something clicked and I wanted to pursue it further. Since then, writing has been a constant presence, a kind of long-term relationship with its ups and downs. There’s a box in the bottom of my closet full of journals from middle and high school. Both my degrees are in writing. It’s just always been there, both as a method of figuring out personal things and as a way to point to interesting things outside myself and say, “Hey, this is important! You should read about it.”

What inspired you to write nonfiction in a world so drawn to the sensationalism of fiction? Who or what were your inspirations?

The first person to put me on the nonfiction train was Keith Taylor. I took his environmental writing class at the University of Michigan Biological Station in undergrad, and that flung the genre’s door wide open. I think there’s this misconception that you can only write nonfiction if something traumatic has happened to you, and Keith showed me how limiting that idea is. Though “Annealing” is pretty inwardly focused, my writing usually mixes personal essay with research writing grounded in the natural sciences. There’s just as much wonder and intrigue and sensationalism to be found in reality too, it’s just a matter of how it’s framed! But other mentors down the road, people like Josh MacIvor-Andersen, Paul Collins, and Michael McGregor, they’ve been extremely influential too. Josh and I worked a lot on this piece. He was incredibly supportive.

When did you know you had enough distance to write “Annealing”? Did you require distance? Or did you need to get the words out of you as soon as possible?

This piece in particular was something that just had to come out. In college, I got away from journaling as a method of self-processing and I hadn’t written something personal in a while. So when Monica passed, eventually I had to return to the way I’d always worked through tough things, the same way birds return to a warmer, easier place in winter. Considering her situation, the situation of a good friend of mine who had been close to her, and my own mental situation at the time, it became too much to contain. It started to consume me. Writing it down was the next natural step. The original draft was much different than this one, though. The original was way rougher in terms of both mechanics and content, because I just had to spill it out.

Annealing” dips back and forth between your time in the workshop and coping with Monica’s death. How did you know this was the right structure for the piece?

With extreme, emotional situations I feel like people become sort of robotic in how they process things. There’s input, there’s output, and there’s a methodology connecting the two. Sometimes it’s easier to think without feeling and that’s why I set the piece up this way. It was like making a grocery list. Splitting up the piece numerically helped me digest what was going on, and switching between two different environments gave me a break from writing all about the tough stuff. If I’d written straight through Monica’s passing and my own darknesses all at once, it would have been too much, for me and probably for the reader. Having a framework to work within helped me get the piece out, and giving the reader a chance to bounce between the sections probably helps maintain external interest in such a personal story.

Your descriptions of the weather and shadows at play seem to reflect Monica’s artwork. Was this intentional? Or something that evolved naturally?

These evolved naturally through descriptions of what I was seeing and experiencing. Now that I think about it, the colors Monica used in her work did lend themselves well to the weather. Winters in the upper Midwest can be pretty monochromatic. Grey skies, white snow, longer darknesses. The shadows weren’t really intentional, though I suppose there was an obvious connection between Monica, an illustration major, and the metals shop which was also in the art building. But these things became more prominent on their own throughout drafts of the piece, I think, as I honed in more and more on what I wanted to say.

When did you realize the process of annealing applied to your life in a bigger way? Have you continued to live with that concept in mind?

Again, this was an organic thing I discovered while writing the piece. It wasn’t like I went into the essay knowing that this would be its overall message. But metals class—all the hot, loud, tactile, and violently delicate work that course required—got me thinking about my mindset at the time and where my life was headed. The chemical and physical processes did, too. The scientific stuff. When my professor talked about how molecules in the brass, copper, and nickel we worked with would just know to realign themselves after the stress of hammers and heat, I thought it was fascinating. Something in me latched on to what that meant and toward the end of the piece, when I’d sort of written myself to its conclusion, it seemed like the perfect analogy. It’s still something I have to remind myself of every now and again, but the ground is much firmer these days than it was then.