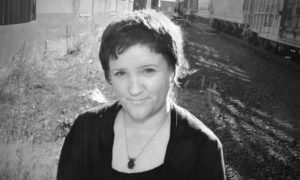 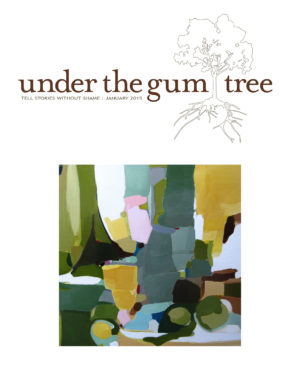 Heather Quinn is originally from San Diego, California but currently lives in Portland, Oregon, where she is an MFA candidate at Portland State University. Her work has been published in The Rumpus, The Riveter, Cutbank, and now in Under the Gum Tree!

Heather’s piece “Memento Mori,” is the skeletal framework and existence of the things that encompass a life in its whole. By interweaving writing and photography and by her exploration through barren, desert landscapes, Heather first lays the foundation of her story. It is by ushering readers through her different stages with memorable markers of a place, thing, or an experience that we begin to see the progression of Heather’s life—and much like we see within our own lives—the many shapes it takes. We feel the everyday mundanities in our lives undergo change, defined by new meaning as she shows us a hair brush is not just a hair brush when its last and final usage is before her mother submits to the hospital for treatment and surgery. And a camera is much more than a body and a lens through which to view the world; it is a preserver of the histories of a life that sometimes go untold. This story transports us constantly from undeveloped desert, to home life and some of its own foreign places we are forced to confront, and back to desert, all in one sweeping continuum, where along the way Heather exposes what it is we should be seeing but sometimes miss.

Right away your title is striking: “Memento Mori.” Most all of us have heard the term carpe diem at some point which translates to “seize the day,” however, memento mori is something which alludes to death and implores us to sort of remember death. What was your thought process behind deciding on this title?

The title is based on a quote by Susan Sontag, from her essay about photography, “In Plato’s Cave.” She says “All photographs are memento mori. To take a photograph is to participate in another person’s (or thing’s) mortality, vulnerability, mutability. Precisely by slicing out this moment and freezing it, all photographs testify to time’s relentless melt.” This really rang true to me, but through most of my reading of the essay, I found myself arguing with Sontag more often than not. Her view of photography is particularly negative—she characterizes photography as a form of violence, of appropriation, and even equates the act of taking a picture to a rape or a murder. My response as a reader, and of course as a photographer, was that there is nothing unique about photography that makes it more prone to these issues than any other art form. When Sontag talks about memento mori, she seems to be implying that this act of engaging with the mortality of others is a similar act of violence, but we don’t need a camera to have these kinds of experiences. Any time we interact with other people or engage with the world around us, we are involved in the mutability of things. There’s a tremendous intimacy and tenderness that can come from sharing that kind of vulnerability with another human being, whether that sharing comes through the act of taking a photograph or from just living life around other people. In my essay, this idea of the memento mori was a guiding principle. I wanted to look at how photography can, at times, enlarge these moments of being present in the face of vulnerability and mortality, and maybe even lend these moments some kind of redemptive power.

Interestingly enough, upon reading the first sentences and unknowing of where Jacumba is, it seems this was a piece about exploring distant lands oversea. Everything you write about the sand dunes and the landscape is so exotic; the colors of the green-yellow insects glued to your windshield, the rust-colored rocks, even your description of ascending through the mountains and life and vegetation all but disappearing enacts a shallowness of breath like high elevation’s thin air. However, although your piece begins with the most sensational, and almost foreign images, you gradually descend down your mountaintop to vignettes of life that are increasingly domestic. The first camera received on a sixteenth birthday, a step-father’s arrest and his time in jail, even your mother’s failing health. This progression in actuality feels like the narrowing of a camera lens, was this intentional and if so, what was behind your motivation?

I love the idea of a camera lens narrowing in focus. I can’t say that that was my intention literally, that I had any notion of recalling something photographic with how the piece was structured, but it was my intention to start with a landscape that seemed utterly foreign—as it did to me on my first visit—from a distance, and as the piece progressed finding ways to connect more directly with certain smaller scale aspects of the place. The California desert really is foreign, and exotic, which—coming as I did from the coast—was stranger for the fact that, as different as the landscape seemed from what I was used to, there is a lot of the desert in the rest of the arid state. When I was living in San Diego, for instance, much of my drinking water was brought in across the desert from the Colorado River. The existence of this vast desert, the lack of water, is very central to life in Southern California, but it’s a world that many Californians simply have not explored. To me, this desert represented a kind of shadow world to the one I was living in. I hoped to bring this out somewhat in the piece by progressively taking a closer look at the landscape and the ruins I found there, and by connecting my own personal experiences with these discoveries. So, for instance, the story of my mother’s passing becomes connected, in the piece, to the discovery of a forgotten photo album in an abandoned home. Both of these vignettes are about bearing witness to loss, about what gets left behind.

Seeing as how your piece so highly focuses upon photography and the use of cameras, we wonder if you do any photo journalism or ekphrastic writing? Your writing is already so vivid with all your detailed description that the pictures that would be paired with some of the things you describe seem unimaginable.

I’m embarrassed to admit that I had never heard the word ekphrasis before, but after looking it up, it’s a great way to describe a lot of my writing. I love what happens when you attempt to translate the impressions from visual art or music into the written form. You always end up with something completely new and fresh that’s a dialogue with, rather than derivative of, the original work. In my case, I often start with photographs before I write anything down. My writing about the Colorado Desert started only after I had been taking photographs there for some time. In fact, my first piece on the subject was an artist statement that accompanied a portfolio of black and white prints of desert landscapes that I exhibited in a group show. I don’t tend to write a literal description of my photographs into a piece of writing. Instead, I might get out some prints, or open some images on my computer, and have a look through them. They place me back in the landscape, remind me in a more visceral way than simply reading through my notes just what it was that moved me about the scene, allow me to recall those first impressions much more directly than I would be able to otherwise. So I guess there’s a kind of ekphrasis in that exercise.

In the final paragraphs you relay that after your mom’s passing, you took the camera back up with a sense of urgency. Naturally something of a comfort and catharsis for you, but when you returned to the dunes, what were you looking to find? Was there a connection to the place because your mom had first suggested you to trek and photograph there?

I guess there is some sense of connection to her simply for the fact that she first suggested I visit there, but the direct connection between the place and my mother really ends there. She was this incredibly joyful, energetic person, totally full of life when she was alive. The desert, on the other hand, is almost completely devoid of life. It’s such a hostile and desolate landscape. So whatever I’m looking for out there, it certainly isn’t her. I think it’s that emptiness itself that attracts me. It’s impossible to enter this kind of wilderness and not feel that, there’s this palpable atmosphere of death and sterility that hangs over the place. It sounds morbid, but I found this comforting. I’ve had a lot of death in my family—my mother, my father, my grandfather—and too often in our culture we are encouraged to move through the process of loss and grieving too quickly. I felt I could relate to the desert in a way, to this landscape of death. I appreciated how unapologetic it was in its sheer desolation and emptiness. Like I said, there’s a lot of the desert in all of Southern California, but in most parts of the coastal cities the aridity is covered up by cleverly irrigated landscaping. In the Colorado Desert, the dryness, and the desolation, is just naked and raw. I liked the honesty in this, and I liked finding the beauty in all that ugliness and death. In a way, it helped me learn how to tell my own story of loss. I found these visits incredibly healing.

Lastly, it seems you have the wish that beauty always be found and explored in everything. You write that in the abandoned homes and ramshackle desert highway, “I was haunting a dead world, stalking some beauty left behind.” How does this have bearing in your own life and your artwork, writing or photography?

I’ve always had this fascination with things that are abandoned, with things or people that are typically overlooked. I guess it’s just about being awake to what’s around you, being present in your surroundings. When you see something that other people don’t, it’s almost as if it exists just for you, or maybe like you exist just for it. In the Colorado Desert, there are a lot of legends of secret and forgotten gold mines. Amateur prospectors and rock hounds still go out into the wilderness looking for these fabled treasures. I can imagine the feeling is similar to what I get out of looking a little more closely at these abandoned homes. When I find something beautiful in these places, when I can frame the perfect photograph of some secret scene in an out of the way place, that’s like finding my own kind of buried treasure. But more than that, there’s a satisfaction in finding ways to tell stories that would otherwise be lost or forgotten. I think that motivates a lot of writers and photographers.