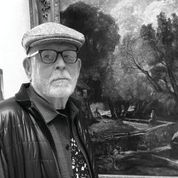 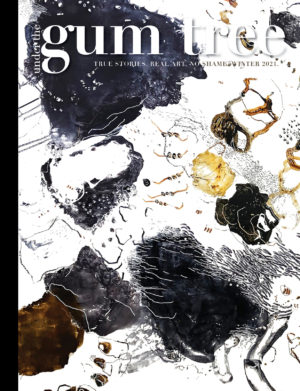 I was lucky enough to interview Charles Tarlton’s this past week about his story Getting Specific, from our most recent Winter 2021 issue. From his bright home on the Connecticut sound, the two of us dove into the details of his story, learning even more about the house itself, as well as his unique process as a writer that started with Political Science Essays, and ending with Tanka Poetry Infused flash. It should come as no surprise that his poetic yet economical prose was born from such abstract and concrete origins. He has mesmerized me with his piece, and I am very happy to share more about how he stumbled upon this enchanting home and turned it into a beautiful piece of prose.

How did you hear about Under the Gum Tree?

I didn’t know anything about Under the Gum Tree at all.

I chose your journal in the way I’ve always chosen journals. I go on the lists and I read the requirements and I read what they are interested in. I pick journals because they look like they might be amenable to the things I was trying to publish.

So I sent it to you guys and then just a series of wonderful things started to happen. All the communications were enthusiastic and complete. You could feel the interest that the people on your end had in the magazine. The personality of the editor comes across in a lot of my communication. The way I got treated was just specular. And then the journal came, and I had no idea! It’s just this beautiful print journal.

Could you speak about your transition to writing flash and micro?

I was a political science teacher up until 2006, then, when I retired, I went back to an old high school and college thing of writing poetry. I wrote some very simple poetry to start with and then I got involved in a genre of poetry that is called Tanka prose.

Tanka was the original short Japanese poetry form, very, very ancient. It was so structured, 5 lines long, and the lines were measured by Japanese syllabus which don’t correspond to ours at all, so there is a lot of looseness in the way that Americans and other people write it in English. The first line is 5, and then 7, and then 5, and 7,7. It’s this little compact poem. Later, in Japanese history, the first three lines were separated and became Haiku.

Then some of the Japanese classics employed the juxtaposition of prose, a novel, essay, travel fiction, whatever, mixed up with the poetry together. Gradually it got abstracted out to a single form.

I wrote a bunch of that stuff for a long time. It’s a blend of prose paragraphs inhabiting the loose boundary between prose poem and flash fiction. It’s hard to tell the difference. But I wrote that for years and years and I was pretty successful in that little niche.

When I first started doing it, everybody was writing one little piece of prose, and then one Tonka poem, and they were interrelated in however strange a way you want to make them. What I got interested in was breaking the form up, so sometimes I’d divide the five-line poem into two parts and put one part before the prose and one part after. Sometimes I’d do 5 or 6 or 7 prose sections and tack on lots of little poems in front of them.

After a while it started to feel too easy, so I started to pull away in other directions and write different things. When I started doing this stuff, the prose poem and the flash fiction are these lovely little poetic structures; I’m always trying to make it as poetic as possible. So I wrote some prose and a lot of poetry and this thing (the piece), I just didn’t know what to do with it, it just took off all by itself. It’s very hard for me to sustain a long piece of fiction, I become too aware of how fragile my structures are so that it always feels like it’s going to fall down at any moment. So, if I try to keep it short, I’m better.

Was the inspiration for this story was house hunting?

For years, my wife and I, we’ve been moving ever since our kids have grown out of the house. But we always have this habit, on a weekend when there is nothing to do, to go drive someplace—we used to live in Saratoga Springs and we’d go up to Lake George, this big, beautiful lake. One day we went up to a real estate office in town and we talked to an agent and expressed what we were interested in. They got it organized and we went out house hunting.

It was very exciting to walk into a stranger’s house on the side of a lake, you know, with big field stone fireplaces and stuff you could never have yourself, right, but walk around and look at it and fantasize about buying it. And we did that, we just did that. I’m sure that’s unethical, but it was a real source of amusement and entertainment for us, and we did it a lot.

But thank God, because the law in Connecticut requires you to bring in a pro to inspect the property to make sure you’re not getting cheated. This guy came back with this report and this house was terrifying! A buried oil tank in the basement, a furnace was barely working, one place where the chimney outside was misaligned. Connecticut allows you to get your deposit back and step out of it, so we did, and went home extremely sad.  Because it just hadn’t worked out. Our infatuation with it was just out of control. We were so far out on a limb and had imagined an entire new way of life and then it was just snatched away.

It seems like you and your wife were caught in the ambiguity of the concrete versus the abstract. Is that why you mirrored that same duality in the story, specifically in the details of the house and the process of looking vs. living?

My training was largely in philosophy, political philosophy, so I tend to look at things generally. That is hard when you’re writing because poetry and stories demand the precise, the detail, the specific.  My brain was trained to generalize, to look for the positions that would tie a whole bunch of situations together. That’s what was going on here, in that first paragraph, for example. Breakfast is ordinarily just an abstraction, it just has a name, and you don’t pay a lot of attention to it, but then, suddenly you’re sitting in a café in Paris and a guy is bringing you croissants and café au lei everything gets very specific.

In terms of the house this was a very definite disappointment that we were trying to come to terms with because we were really over extended. I mean we were in the moment with that house, imagining ourselves living in that house, I was fixing dinner parties for company. I was looking around for the grocery stores and the butcher shops…

There is no generalizing from it, you are in the moment. You can’t hide behind the abstraction, that’s how you avoid getting too caught up in things.