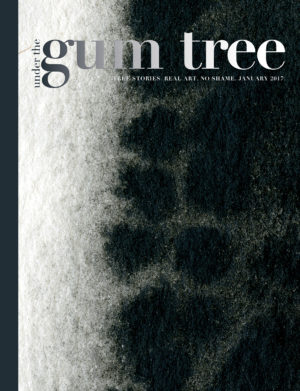 Andrea Roach is a writer of memoir, essays, and creative nonfiction who lives and works in Boston, Massachusetts. She received her MFA in Creative Writing from Lesley University and was a finalist for The Writer’s Room of Boston Fellowship Award. Currently, she is working on personal narrative essays and the third draft of her first book, a memoir, about the blurred lines of love, family, and violence. Her work has also appeared in Blavity.

I fell in love with writing and stories when I was very young. My mother was a reader and she filled my life with books and introduced my to the library. It was an elegant and symmetrical building built in 1898 with massive columns framing the front entrance and smooth stone walls with Renaissance Revival features and globed lampposts out front. The Children’s Room had its own entrance on the side. I remember the mahogany door and the dark wood bookshelves. The library was the first place I was allowed to walk to on my own as a child, my first experience with independence.

I also consider my mother to be the first writer I knew and while she didn’t write stories or have the luxury to pursue a career for herself, she was the first person I saw put pen to paper. She wrote thoughts, letters, doodles and I of course wanted to be like her, so I began to do the same. That kind of writing has a healing, cleansing quality to it that I appreciate.

I wrote my first story in the fourth grade with my best friend, Paula. It was a horror story, and it had all the standard scenes we saw in movies, blood pouring out of faucets and running down walls, with bits added from the ghost stories my parents told me on family nights. I didn’t have a typewriter so I dictated and she typed. I wish I had saved those pages.

What inspires my writing now is the mystery and magic of telling a story, its movement. Once I surrender to the process of whatever story is trying to be told through me, I find myself on this fascinating journey of discovery that makes everything seem shiny and new. Even after long periods of time trying to figure out how to enter a piece, a stretch that can feel so heavy at times, the moment it comes to me is super exciting. I really dig that rush. This current draft of my memoir has led me to the depths of human complexity, the pulsing heart of every instrument that Ornette Colemen played and the metaphorical genius of molting cicadas. I can’t wait to see where it takes me next.

My characters also drive my writing. I like to write about people I’ve experienced growing up, invisible people, the victims of domestic violence, the homeless men who live in doorways with their trash bags, newspaper-lined shoes and liquor bottles. These people, who have suffered and struggled everyday of their lives, are full of wisdom and love and I think it’s hard for some of us to look past their tragedy and see their humanity. Agatha and Aaron are the main focus of my essay but writing about the “Avery girl”, a person I only knew through a story overheard as a child, who had such an impact on me that I recognized her a decade later, also felt important to the idea of how people, even strangers, imprint themselves on us and shape our viewpoint of the world.

Why are you drawn to nonfiction?

This is something else I’ll attribute to my mother. She loved true crime stories and biographies. She also turned me on to documentaries when I was young. We’d watch PBS together all the time and she’d scoff at anything that wasn’t “true”. So that’s probably where it started. What I like about nonfiction writing is that it demands a fearlessness and an honest confrontation of self. If you’re going to do this kind of writing, you can’t be afraid to speak your truth and that requires some real excavating. As nonfiction writers, we have to get beneath the surface of experience and our own external representations to find verity. I actually like doing that kind of sleuthing. It helps me grow as writer and a person.

I think you can find a story in almost anything. I tend toward large heavier landscapes like death, love and abuse, but I also think an essay about the day you accidentally swallowed a fly that was in your coke can could be just as intriguing as going to the wake of the woman your uncle killed if the writer is able to connect it to the human experience in a meaningful way. I look forward to writing some lighter pieces just to balance out the space I’ve had to occupy to write essays like the one that appears in Under the Gum Tree.

How much have lies and hope intertwined in your life? Do you continue to think of them as things that work off of one another?

Good question. I’ll try not to go too far off the topic of the essay. The symbiotic relationship of lies and hope has always been part of my life, even before I was born. If you think about it, lies and hope are the foundation of our civilization. We live in a society/world where there have historically been hierarchies of wealth and privilege and ruling classes that have thrived on our willingness to believe the stories and promises told to us. The relationship of lies and hope is important to understand because it drives our thought processes and behaviors. Edward Bernays, the father of public relations, understood this with his analysis of political propaganda and consumer culture and I think that some of his theories can be applied to the way we navigate certain situations and relationships. When I came up the title “The Lies We Call Hope,” I was thinking of “lies” as self-deception, not really as purposeful untruths meant to manipulate. The stories and omissions we tell and justify to make people and ourselves happy or to avoid pain save us from being swallowed by fear and worry. They help us dream and imagine. It’s taught behavior and it’s useful but those same stories and omissions can also become crutches used to protect us from emotions that we think will crush us. I think in that way lies and hope can inhibit our ability to see and deal with hard truths. I try to be aware of the stories I tell myself in order to figure out what I’m avoiding or what I need to learn, especially in difficult situations.

Upon entering the funeral home and coming face to face with Agatha’s family, are these hopeful lies stripped away? How did their grief force you to confront what had happened regarding your uncle, Aaron?

I think the hopeful lies were stripped away but I don’t think I was aware of it at the time. I just thought I was naïve, and I was. I thought that because I didn’t personally kill Agatha that it wouldn’t be a problem for me to go into someone’s space of mourning but the pain and anger was so palpable it scared me in a way I had never experienced. I left with an uneasiness that haunted me for years. And it took a long time to find the words to express that feeling. The wake was a turning point for me and the way I viewed violent men. I grew up witnessing physical violence but a man has never beaten me. I describe my uncle, who is very close to me in age, having a soft angelic voice and that’s the man that I knew. I had to separate the other man, the violent Aaron, from the loving one and that’s something I was taught by the women that raised me. The monster in men was something we had to exorcise with love. It became our responsibility. I think up to the point when I went to Agatha’s wake, I still carried the idea that somehow the abuser deserved more compassion than the victim because he was sick. When I saw Agatha in her casket and was met with so much hostility from her loved ones, I was forced to start looking at abusive relationships in a different way.

I told myself that it didn’t matter what he did because in my family, love and violence are the same.” Love and violence resonate throughout your piece; do you see them as two sides of the same coin?

I don’t see love and violence as two sides of the same coin but because I grew up with damaged people who really wanted to love and be loved I understand the dynamic. My parents could never get past the inherited pain and ideas about men, women and relationships given to them from other generations of damaged people. For them and for my uncle and me, love and violence morphed into normalcy. It was the only model for romantic relationships I had seen growing up. I was lucky that my mother was determined to make sure I didn’t live her life. She guided me, the best way she could, to another path. I’m grateful for that and a lot of other factors that have helped me to live life differently.

Agatha appears to be the opposite of you: stripped of her identity as a black woman and, in death, totally unable to express herself. Is she part of the reason you wrote this piece?

Yes, that’s part of it. I had only met Agatha twice, briefly, before she died and both times she seemed quiet and reserved. Maybe it was because she didn’t know me, I can be shy too when I first meet people. I wrote the essay for Agatha, to give her a voice and perhaps even pay penance for my blind loyalty to my uncle. I’m exploring her more in my memoir.

My mother also had something to do with this essay, and everything in my life, as you may have noticed. She died of lung cancer shortly before I started my MFA program and I initially wanted to tell her story. We joked about it sometimes, that our life could be a “movie of the week.” It was part of my own grieving process and a way to honor her. I was so afraid that she would just be erased and I couldn’t let that happen. In writing my mother’s story I thought about the word survivor and what that meant and I thought about how my mother, a victim of domestic violence for 15 years, could have been Agatha. My mother was also very different from Agatha, she was out spoken and strong but also misunderstood, called crazy, without any consideration for the abuse she endured. That bothers me. So it’s important to me that the women I write about, who have lost their lives in one way or another, are seen and understood.