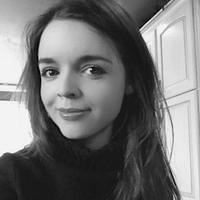 Tasha Cotter’s first full-length collection of poetry, Some Churches, was released in 2013 with Gold Wake Press. Twice nominated for the Pushcart Prize, her work has appeared in journals such as Contrary Magazine, NANO fiction, and Booth. A graduate of the University of Kentucky and the Bluegrass Writers Studio, she lives in Lexington, Kentucky where she works in higher education. You can find her online here.

Tasha’s piece, “And How to be Alone,” is being featured in the Stomping Ground category of our sixteenth issue. Her story is a requiem for the loss of her parents’ marriage as well as a bittersweet reflection on her relationship with her father. The piece addresses life’s changeability and the unrelenting pressure we feel to find continuity. Both embittered and loving, Tasha’s story is a meditation on relationships and how they effect us.

How were you affected by your parents’ divorce?

Their separation had a huge impact on me, which was surprising. I still feel like I’m sorting it out. I was in my mid-twenties at the time and had never been especially close to either of my parents, but they were together for nearly thirty years. I think the shock stemmed from the immediate change in priorities and identity. I prioritized understanding what I was being told. If they were really separating, I needed to understand why that was happening. As a daughter, I was used to the foundation and solid ground their union provided. There was a comfort in that knowledge and a clarity about who I was and who my family was. Feeling their union fragment and shift shook up my life. Things changed shape. They changed color. For a while, nothing seemed rooted to the ground, and nothing felt safe.

I’ve always been closer to my mother, simply because she was the parent who really raised my brother and me. She shuttled us to school, to after school activities, she attended band concerts, and was an active member of the PTA. I could go on and on. My mother did it all (and managed their store in town while doing so). In short, she spent a lot more time interacting with us. My father worked from sun up until sun down—he defined himself as being a provider. That’s just how he interpreted the role of being a father. Farming and factory work are two of the primary industries in the area I grew up in (south central Kentucky). I come from a long line of farmers. And making a living farming is extraordinarily difficult. This is what led him to construction. His days were spent working on the farm or at the fence store—a company he started with my mother over two decades ago. It’s still in business today.

You mention that your father’s ability to get the divorce court judge to appear on a Sunday was a “testament” to his good reputation. Did other peoples’ views of your father change the way you saw him? Did you feel like he deserved the reputation he had, or did you see him differently than most people?

Growing up, I saw my dad as most girls see their dads: they’re like superman. They can do anything. And they make the rules. My dad was my hero, albeit distant hero. When I was told my mom and dad were separating, something in that shiny, unspoiled view began to crack, and a new, truer picture of who he was began to take shape. Sure, my dad—and my family, for that matter—had a good reputation (which is awfully important in the south). My parents had a business in town. My family attended church every Sunday. But my perception began to change. I began to see how my family had been struggling for a long time actually, to stay together despite being broken apart by secrets and poisoned by lingering disagreements and distrust. When so much goes unsaid, it creates this toxic environment, or at least it did in my family. For a long time, there was no lightness, and no laughter. I could feel how uneasy they were around each other in the year leading up to their separation. It was like they had each other on mute. In short, everything came into focus the moment the word “divorce” was spoken. One thing came to an end and a new reality began.

Divorce is an experience many of us have endured, or will endure one day. Often it makes us feel unstable, insecure in the life we’re used to. We feel blindsided, either by our parents or our significant other. Did your parents’ divorce make you see your own life in a different way? Did it change your relationships with other people?

Their divorce had a profound impact on me. They say hindsight is 20/20, and at the time, their separation was as inconceivable to me as it was inevitable. It confused me and made me question everything. I’d childishly assumed they would manage to stay married forever, despite their differences. Above all, their separation made me realize I’d had a very good childhood, and was lucky, in a lot of ways, to have had such a balanced childhood. I’d taken that for granted. But their divorce had a huge impact on how I judged relationships, and how I went about deciding when a relationship was worth saving and when it couldn’t be saved. These were all things I thought I knew in my early twenties, but I didn’t really know. I didn’t have a clear idea of what relationships could weather and what they couldn’t. I thought I had a lot figured out, and turns out I didn’t. Not really, anyway. Life swooped in and became the teacher, as it has a way of doing. Their separation was a snap-to in a lot of ways. In an odd way, I feel like it helped me grow up. It put all my ill-formed theories about love and naïve ideas about marriage to the test.

I have always looked up to my father. He’s the hardest working guy I know. I just wish I had a closer relationship to him. In some ways, I feel like I inherited his need for solitude and space. My dad was always happiest walking the land, checking on the crops and the livestock. He thrives on the outdoors just like I do. But he’s never satisfied, and his extreme focus on providing for me and my family sort of ruled out any chance for a close relationship. He was simply gone all the time, or completely exhausted from work. I think their separation made the two of us closer, because I instinctively felt the need to reach out to him and insist on knowing how his day was and what was going on with him. At the time I just felt like my family was this tiny beautiful thing that had just been hit by a giant meteorite, pieces flying through space. We were all spinning away from each other, and I knew we had to stay in sight of each other if we were going to be anything at all. I felt like my dad would close himself off if I let him, so I had to work to keep the line of communication open. My dad is a very guarded person in a lot of ways. He and I both are, I guess. But we did get a little closer, and I’m glad we did.